Kevin woke up inside a rattling cage. There were humans outside with a cart pulling is tiny cage that looks like it would have a cat inside. But really there was a baby dragon. When Kevin woke up things were not pleasant. It really was like being reborn all over again. Only this time Kevin wouldn't forget. Everything was way too noisy. The talking of the nearby humans and the creaking of the wagon as well as the birds in the air and any other noise you can think of. They were all so loud and it hurt his ears. That wasn't the only thing either. There were so many smells and they were all so strong it was burning Kevin's nose like nothing had burned before. Kevin tried to open his eye but oh lord the vibrant colors and sights as well as the sun. It hurt even his eyes. Especially the sun light. Kevin could actually feel his pupils shrink down to a size impossible for humans to keep the light out. Kevin tried to move but his muscles and body was all different. Even even had 2 limbs he hadn't had before. He didn't know how to move any of it. He just flopped around in the cage trying to figure out how to move his own body. It was safe to say he was terrified. Not of the humans but of what was going on with himself.

The humans and the baby dragon were traveling through EarthWing territory though they didn't know that. They just knew they had been payed a large sum of money to take this dragon deep into dragon territory. 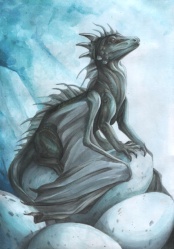 Flapping her large wings the she dragon casts a giant shadow over the Earthwing land. She was a big dragon, not as big as her leader but of course big. Though the dragon was big she was peaceful, she had to be as a healer. She couldnt be fighting and getting hurt. As Sorrell continued to fly she looked down, small ant like shapes catching her eye. Growling she knew what these were, humans. A vile taste filled her mouth as she spat out the word. "Humans" she growled low.

The rattling of the mechanism the humans had echoed through the forest. The she dragon heard it and folded her wings, diving down. The wind blew past her and she roared, showing the humans she was coming and she was coming fast. Landing on the ground she dug her claws into the ground and stomped over, her eyes finding a small little male dragon in a metal like thing. The healer had never seen a cage before and growled. The only thing she knew is that she had to rescue the hatchling. Even if it did look like a Nightwing.

Roaring a loud and powerful roar she grabbed a human, throwing it out of the way. Many of the humans pulled out shiny things and poked her. She frowned, was that supposed to hurt. She picked all the humans up in her claws and placed them on a rock. Showing her teeth she pointed with her tail the way to the ocean and they stood, frozen.

Turning to the cage she used one of her claws to cut the cage open. Sticking a claw in their gently she picked up the hatchling. Letting a smile spread across her face she stared at the hatchling, the flowers on her wings growing a bright pink.
_______________________
This is Luna on a different account!

Suddenly the area shook like there was a sudden earth quake. Kevin's cage fell over and the humans sounded panicked shouting and stuff. The noise hurt Kevin so much he wasn't able to even concentrate and pick out the words being shouted. He too was terrified. Suddenly the crazyness stopped and there was silence, but what came after was even more terrifying. Kevin felt himself get picked up. He completely froze and didn't move a muscle. Not that he was too good at moving his muscles anyways. Forcing his eye open struggling to see and ignore the overwhelm meant Kevin has to day who had picked him up. He felt so helpless and knew that he was tiny even to a human. Trying to get his eyes to adjust the super high definition picture and blinding sunlight he was starting to see who or what had picked him up. Suddenly he wished he hadn't opened his eyes. Picking him up was a gargantuan dragon. Kevin fainted on the spot.

The humans ran, their screams echoing the forest. Sorrell growled at them, her large white ivories sparkling in the sun. Usually the female wasnt so angry but this was a hatchling and she would protect it with her life. Blinking her soft pink eyes she nuzzled the little hatchling. His scales represented one of a Nightwing but she didnt care, she only cared about the little hatchling being safe. Turning her head back she saw one human creature watching her. Setting the hatchling on her back she stomped over, careful to not let the hatchling fall.

Opening her maw she let out a powerful roar and pushed the human down softly, using her powers to have vines grow over him. Snorting she turned away and put the hatchling on the ground. Seeing him squint she lifted her gigantic wings to block the sun. Being a healer she knew newborn hatchlings were sensitive to bright lights. Knowing he should be in a safer place she picked him up in her claws. His limp body felt like a twig in her claws. Using her two front claws she held him with such care and love it looked like she was carrying her own hatchling. Lifting off the ground the gargantuan dragoness took off, flying at a slow speed to not hurt the hatchling in anyway. Though there was no way he could get hurt while flying she took extra precaution, this was her hatchling.

Landing down by a pond she watched as geese and many other birds flew away in fear. The dragoness laid the hatchling down carefully and studied him. What would she name him. Thinking for a moment she remembered a nice old elder dragon she had met named Dusk. Looking at the hatchling she smiled softly. "Dusk" she said softly, her pink eyes staring down at him with care in her eyes. Dipping her claw in the water she pulled it up and flicked some water in the males face while moving him away from the pond so in case he woke up he wouldnt fall in the pond.
_______________________
This is Luna on a different account!

Something wet fell on Dusks face and he woke up. As he did so he thought. "Oh thank goodness it was just a bad dream. I can wake up now and move on with the rest of my life." Dusk knew thought from the very loud sounds around him which shouldn't be so loud that it wasn't a dream. He opened his eyes again which was getting every so slightly easier. He was greeted with the same sight he saw last time he opened his eyes and seeing that giant dragon for the second time didn't make it any less scary from the first. After a good long while of nothing happening Dusk finally realized this dragon wasn't going to hurt him. In fact if his guess was right she had adopted him as her baby. This was perfect it was just what Dusk needed. He had no idea what the dragon world was like. He didn't know how to speak dragon or what dangers to avoid. Heck he didn't even know how to move his own body yet. Having another mother was the only way he would survive and he would make sure to be much more grateful and obedient to this mother than he had his last now deceased one.

Flailing about on the ground it took awhile before he could stand up straight. Moving very slowly and trying to move forward towards his new mom with the strange concept of 4 legs. His wings and tail drug against the ground limp. He hadn't figure out how to move those yet. Eventually he reached his new mom and rested up beside her. In his head though he couldn't believe he was now touching a dragon an impossibly large one at that.

The dragoness watched as the little hatchling finally woke up. She smiled and watched as he began to move. She watched as he tried to get used to moving. It was normal for hatchlings to be confused. She had helped with many births and watched as the hatchlings stumbled around. The dragoness smiled as he began walking over to her. She noticed two faults in his walk, he let his wings drag on the ground, he is supposed to keep them up, high and proud. Shrugging to herself she felt him rest up beside her. Moving him while she laid down she put him back next to her and smiled. He was the new addition to the Earthwing tribe.

Nuzzling him softly she smiled and asked him in a soft, kind voice "Where did you come from?" and watched him. She didnt want to overwhelm the hatchling. He was just surrounded by those nasty humans. The she snorted, they were disgusting, capturing an innocent hatchling like this one. He was so cute, with his large wings and ash grey colored scales. Rubbing his head gently with her maw in affection.
_______________________
This is Luna on a different account!